Since 2005 Grade 6 students have been making a group mosaic which is presented to the Principal at the Grade 6 Graduation in December. Since we have completed mosaics for all twelve  of the animal characters we need to decide what this year’s topic will be.

The Year of the Monkey ( 2016) mosaic was designed by a group of  Grade 6 students who submitted designs. Emily, Jasmine, Liana,Vlad and Aliyah all contributed ideas to the final design. Many students helped to cement on the tiles which they cut, using side nippers and, of course, wearing safety goggles.The monkey’s ears were made using mug handles.The twelfth in our Chinese Calendar series, this mosaic is displayed  along with the eleven other animal mosaics along a wall in our school courtyard. 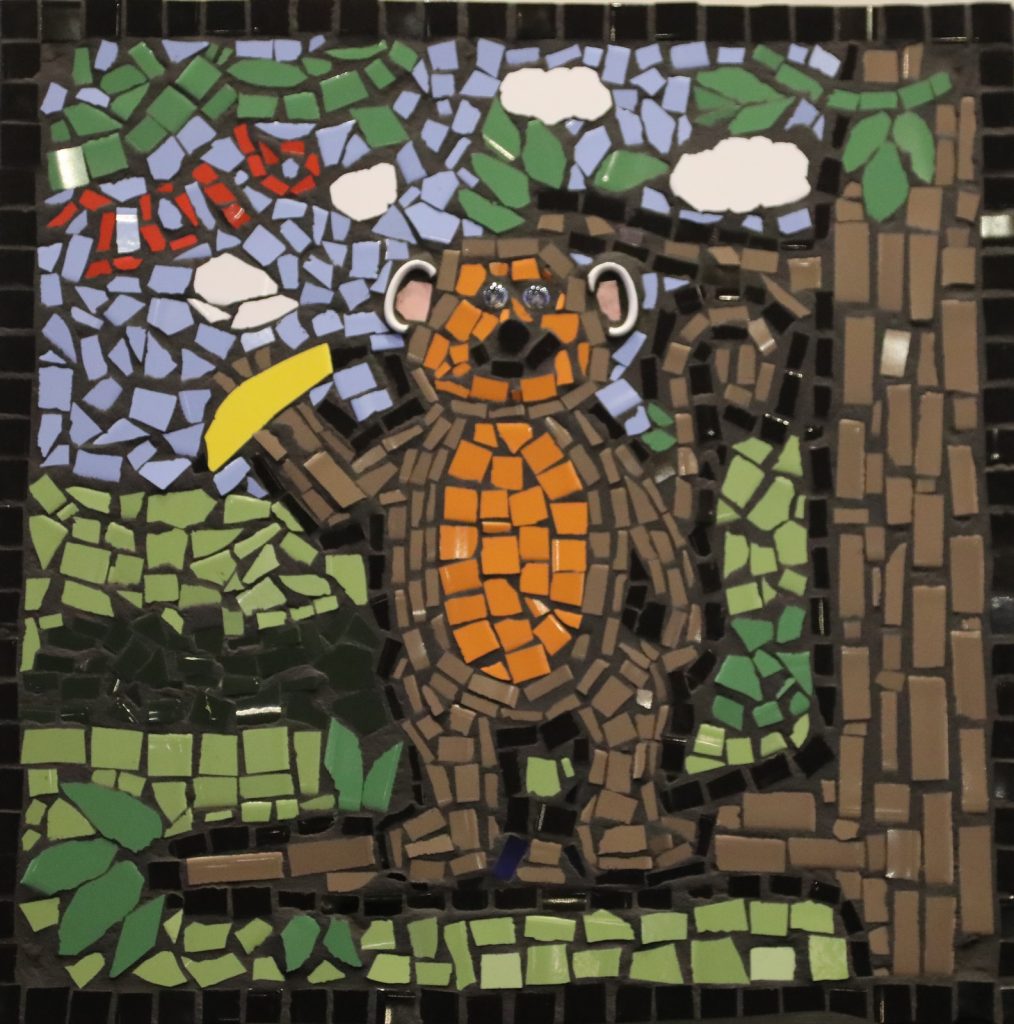 The Year of the Horse Mosaic for 2014 was designed by Tahlia Akurt. Congratulations Tahlia ( pictured on the right). Also presenting the Mosaic  to our Principal, Mr Chris Sevior, on December 18th was Pesiny (left) who added the Chinese symbol for horse to the top right of the mosaic. 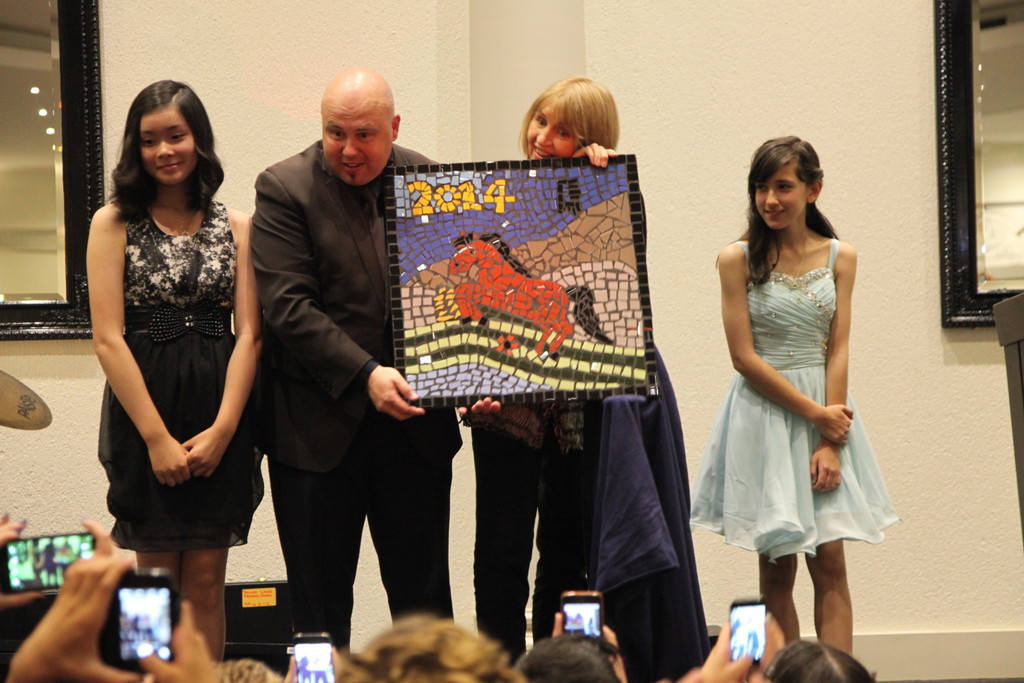 In 2013, Grade 6 students  Sasini and Jamie-Rose provided the design for the mosaic and all the Grade 6 students helped  cut and cement on the ceramic tiles to form the picture. The completed mosaic  was presented to our Principal, Mr. Chris Sevior at their Graduation ceremony on December 19th. 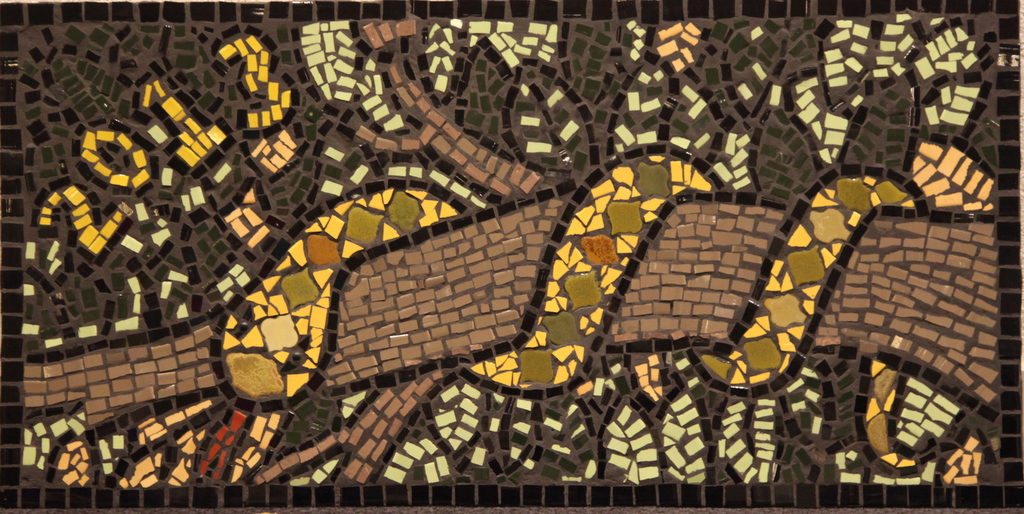 In 2012 the Year of the Dragon Mosaic was designed by Caitlyn  of 6JS. Congratulations Caitlyn.

In 2011 The Year of the Rabbit Mosaic was jointly designed by two grade six students, Nethmi and Sukhjit. 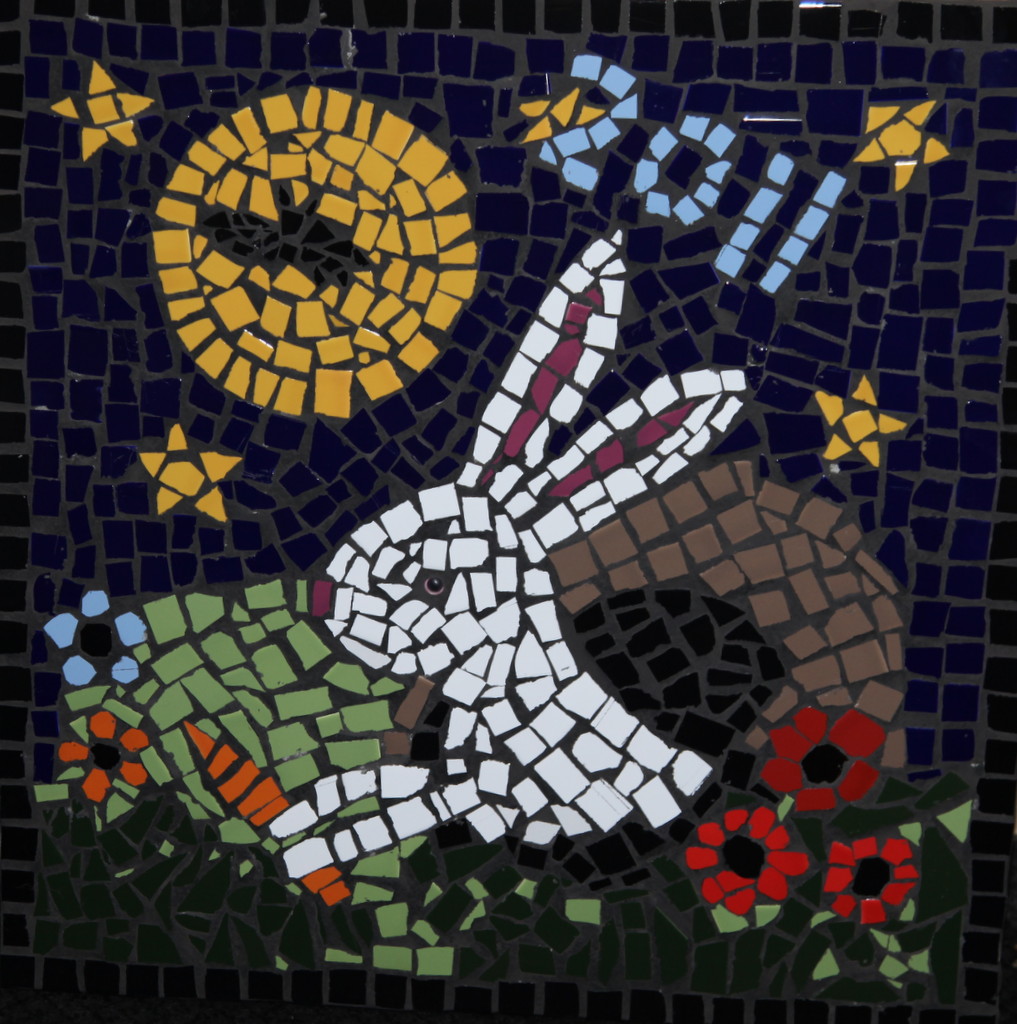 December 18TH 2010 – Last night’s Grade 6 Graduation was held at Luxor Receptions in Sydenham. At the end of the evening, as is tradition, the Principal, Mr Chris Sevior, was presented with a Mosaic depicting the animal featured  this year on the Chinese Calendar. Erika’s design was chosen and made as a group effort by Grade 6 students. Congratulations go to Erika (pictured) and to all the students who contributed. The work will soon join the five previous year’s mosaics on  the wall in our school courtyard. 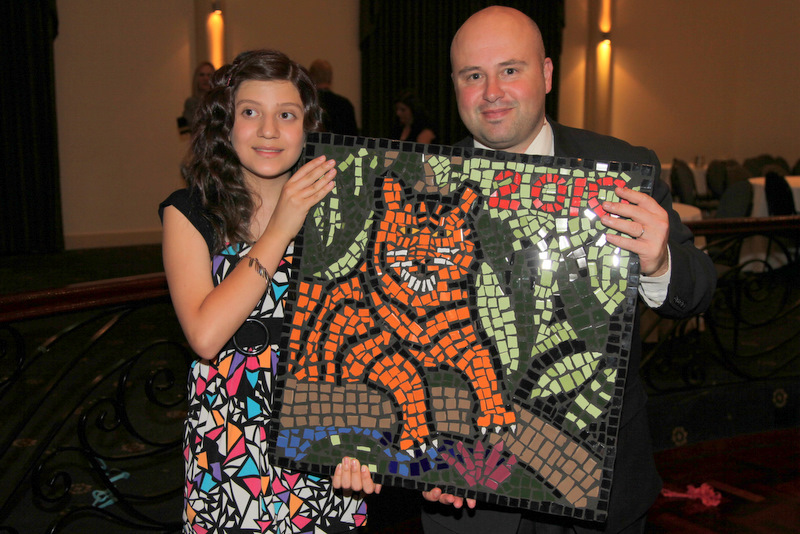 Sasini and Jamie Rose were the designers of this year’s mosaic for the Chinese Year of the Snake. We used Sasini’s snake on Jamie-Rose’s leafy background. Pictured in the photograph are Art Teachers Glenys Vella and Yvonne Osborn, Principal Chris Sevior, Sasini ( in blue) and Jamie-Rose. Our sincere congratulations go to both girls and to all the Grade Six students for their help in completing this year’s mosaic. This is the ninth in a series of 12 which began in 2015 with the Year of the Rooster. They are displayed on our school’s courtyard walls. 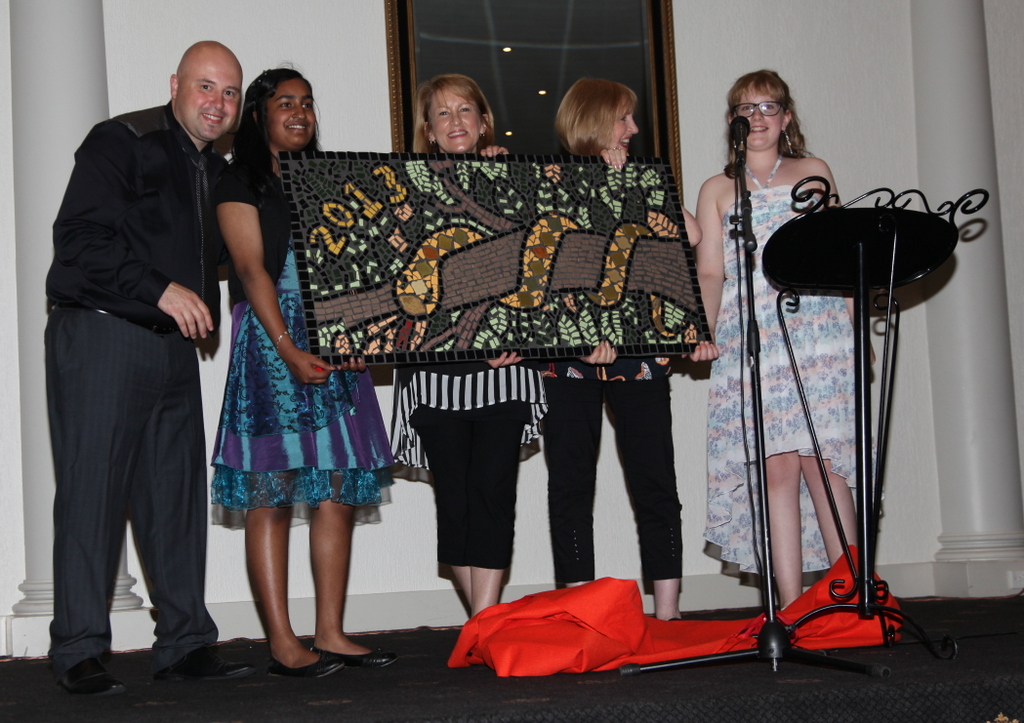 Erika Doria was the chosen designer for the 2010 Grade 6 Mosaic. Erika’s tiger came up well in the brightly coloured ceramic tiles and the finished work shone billiantly under the spotlights on Graduation night. It is pictured here with Erika (left) and Acting Principal Chris Sevior. 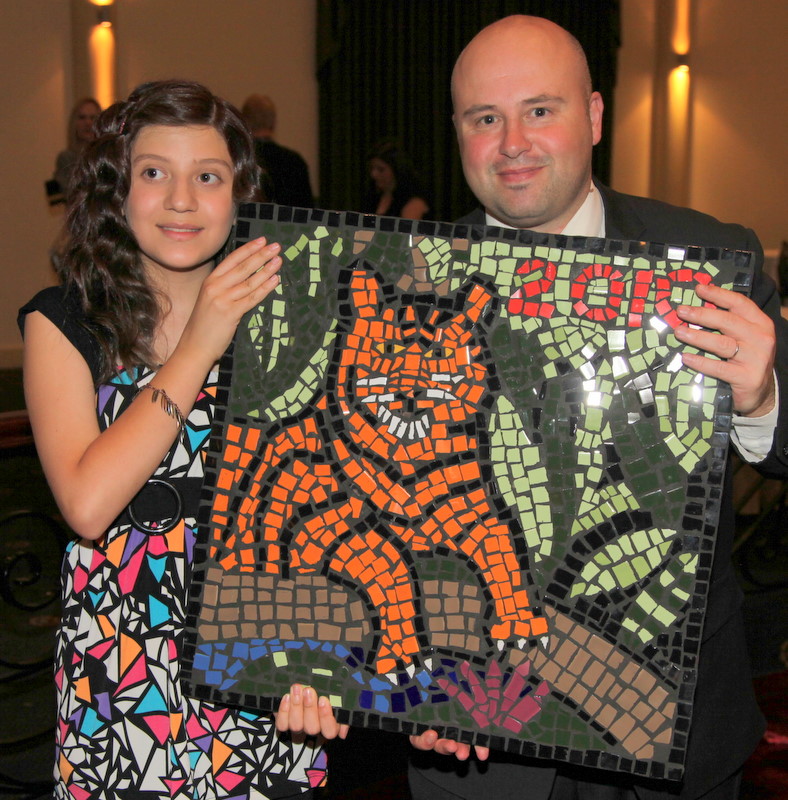 BJ Bentley, our 2009 designer, looks on as our Principal, Mr Peter Reading accepts the 2009 Year of the Ox mosaic.
This is the 5th in our series representing the years of the Chinese Calendar. 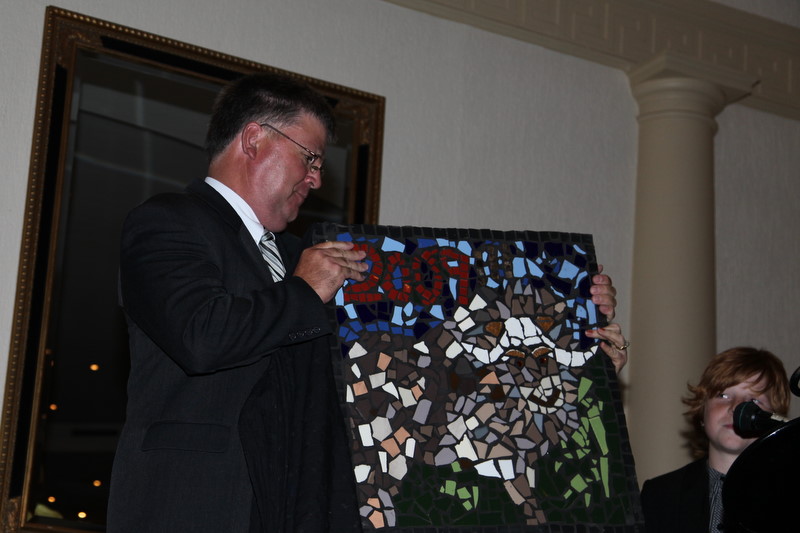 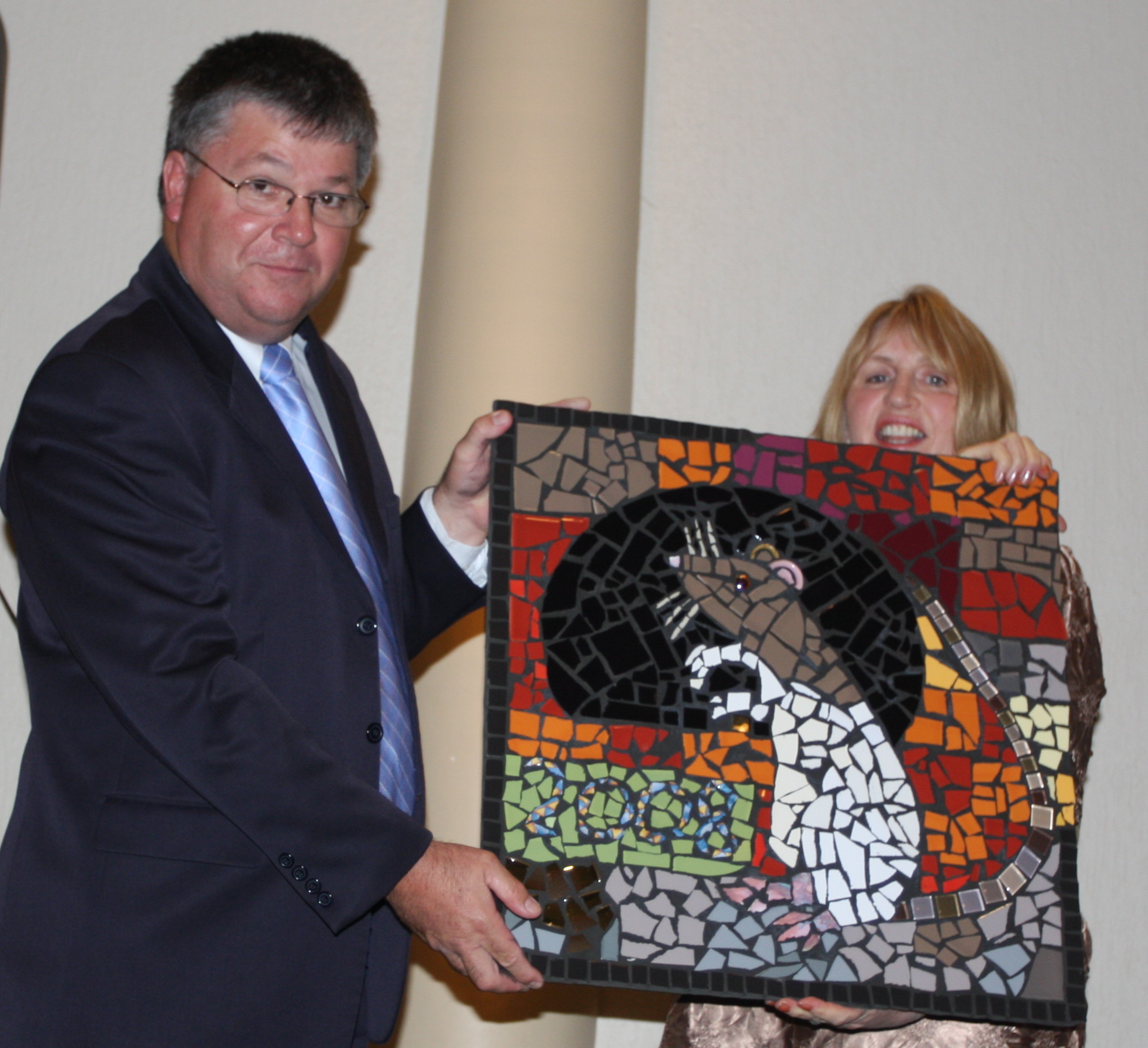 Our New Mosaic was presented to our Principal at Grade 6 Graduation on December 18th,2008.

Our Mosaics have finally been displayed in our school courtyard. They are done each year as a Graduation Gift to the school. A student drawing is used as the basis of the design.The animals depict those used in the Chinese Calendar. 2008 is the Year of the Rat so we will work on that Mosaic in Term 4.

I have been fortunate to attend a 2 day workshop run by Mosaic Artist Deborah Halpern.

It was held at Ballarat Art Gallery in 2005.Below are 3 photos of Deborah’s work during the grouting process. 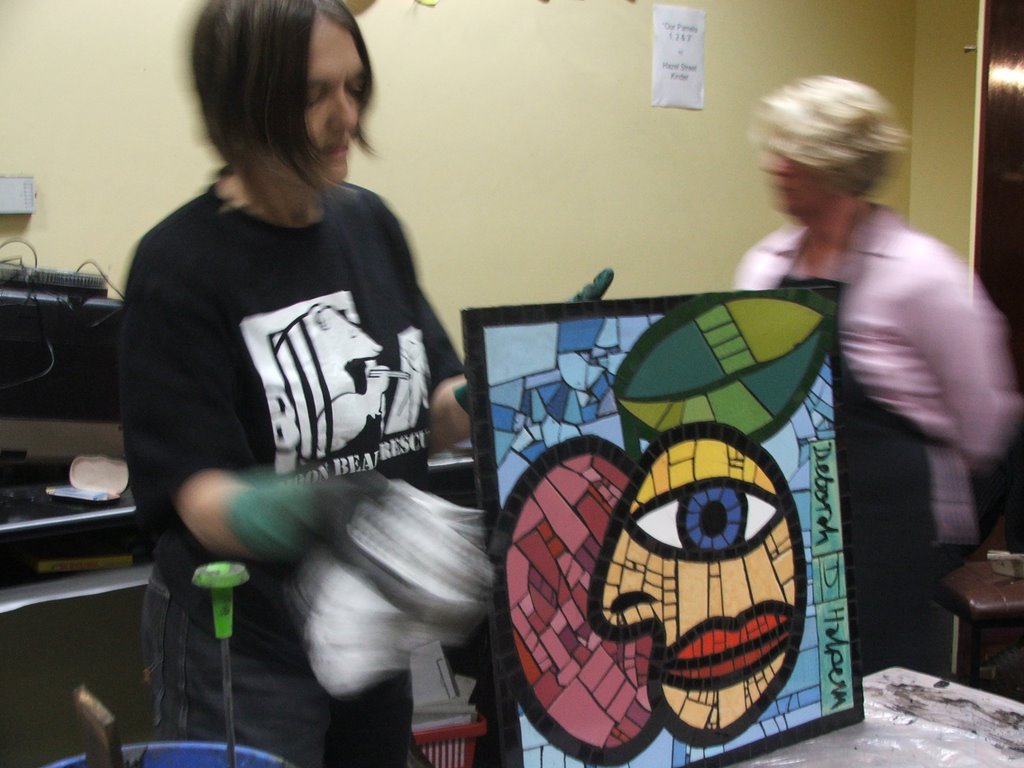 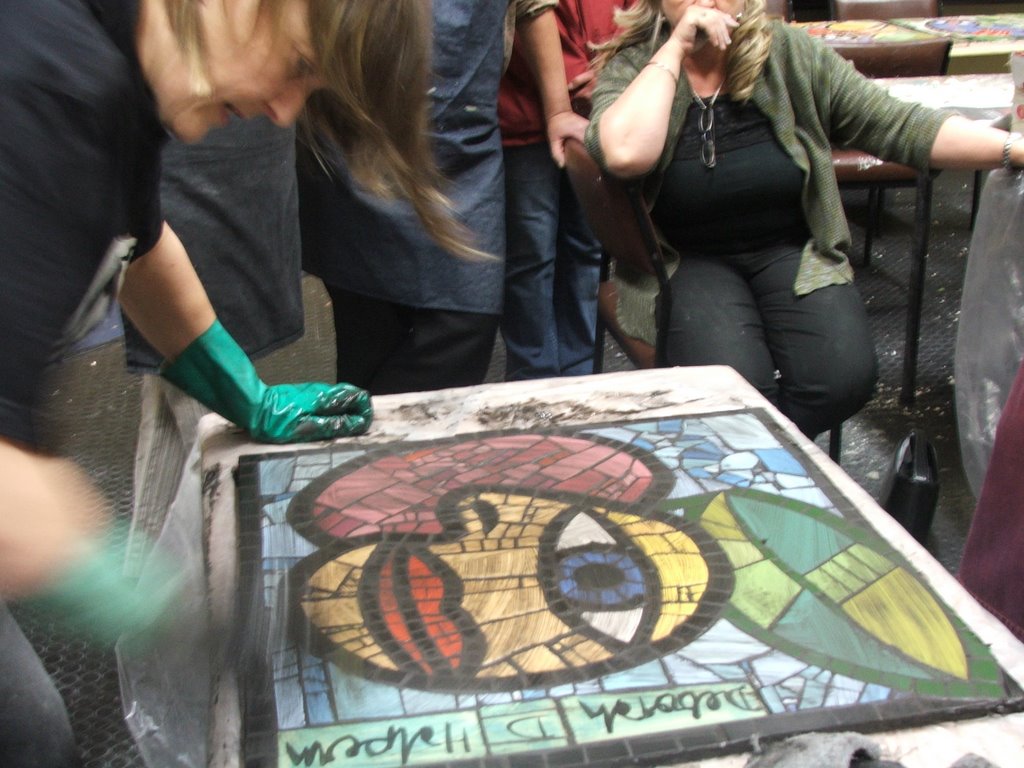 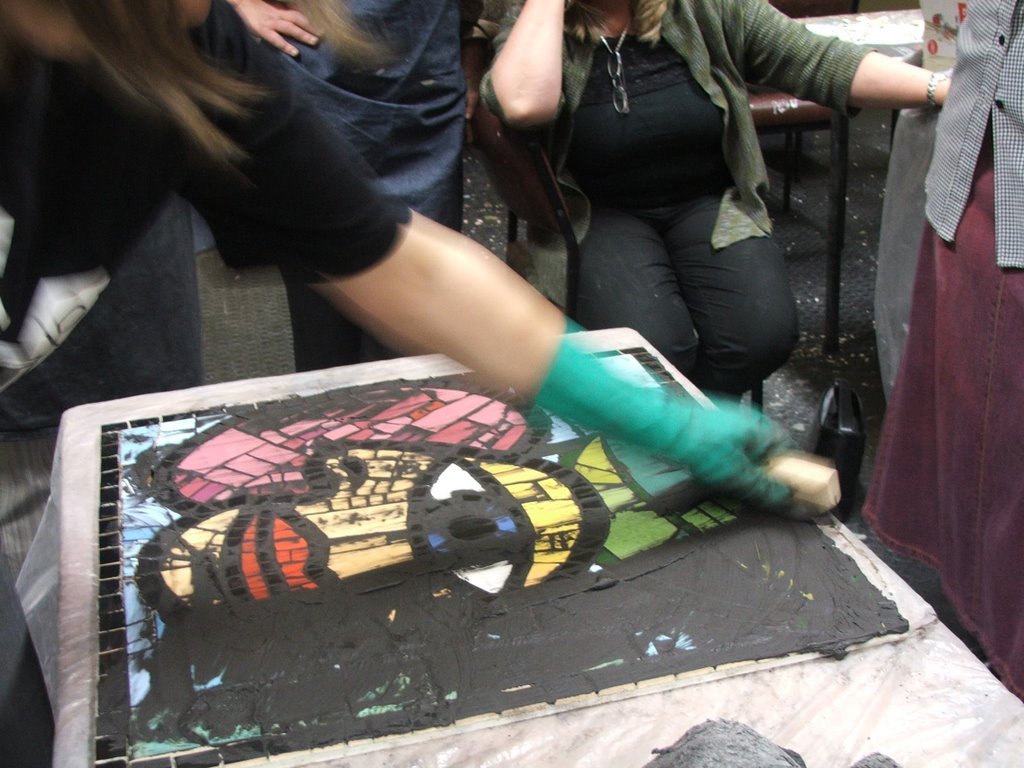 Save
Our Tiger Mosaic is ready for grouting. Erica of Grade 5/6 AR was this year’s designer. Congratulations Erica. We like to keep the finished Mosaic as a surprise for  its presentation to the School Principal at the Grade 6 Graduation. The  photos of the presentation should be ready on Friday 17th December which is the last day of  the
2010 school year. 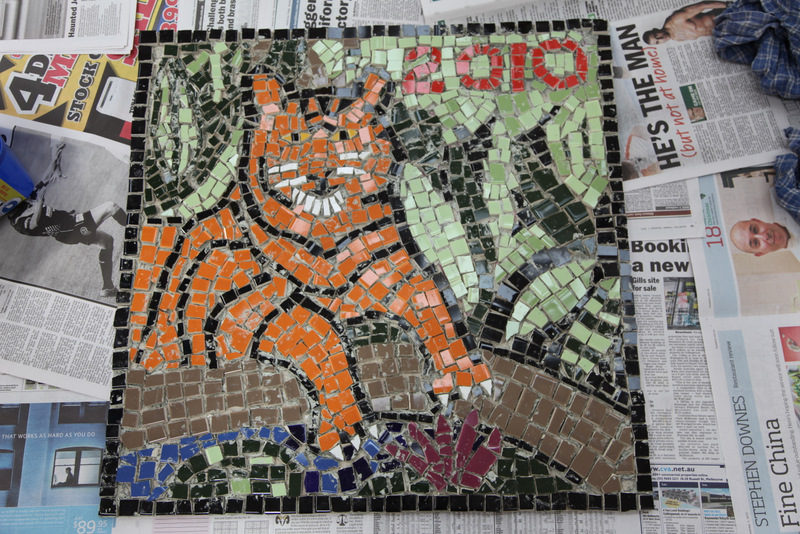 Our school has a tradition of making a mosaic for each year of the Chinese Calendar. Students have asked which is their animal.These may be found at http://www.activityvillage.co.uk/chinese_new_year.htm

2010- This Year we will make a group mosaic of a Tiger. The Grade 6 students will all contribute during Fourth Term. We choose one of their Tiger drawings to use as the design and  then we all cooperate to complete the work. The hard part will be finding orange tiles. 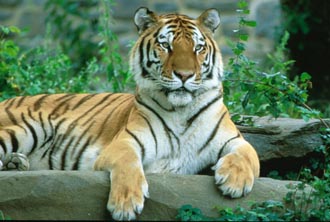 2009 – This year we are adding to our Mosaic collection with a mosiac of an Ox. Sketched by Grade 6 student BJ or Beaujess the Ox  is well underway. Students take a break from their own mosaic work and place a few tiles making it a group piece to be presented to the school Principal at Graduation on December 17th 2009.

17th July 2008.- We heard the sad news today that Munchkin died a few weeks ago. We were fortunate to meet, admire and draw her earlier this year. Later in the year we will make a rat mosaic and dedicate it to her memory. RIP Munchkin. 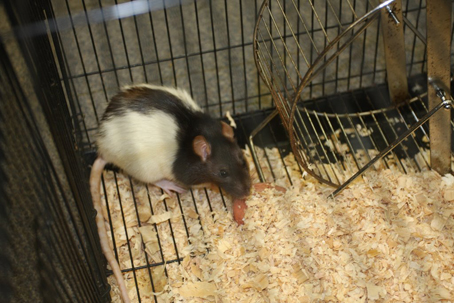 corresponds with the Chinese Calendar for that year.

This year, being the Year of the Rat, we were visited in the ArtRoom by  pet rat, Munchkin.

We watched her closely and have prepared some drawings in preparation for our Mosaic later in the year. 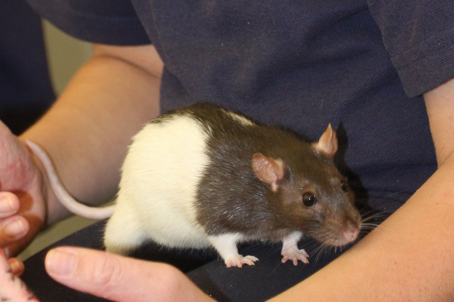 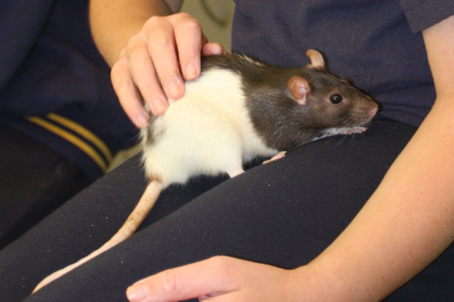 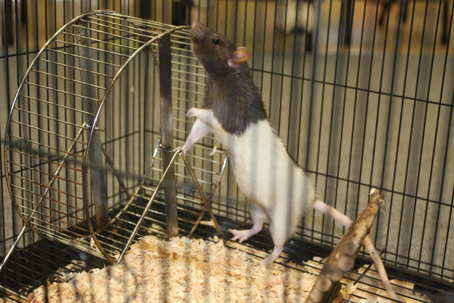 Each year the Grade 6 students at Taylors Lakes create a mosaic featuring the animal which corresponds with the Chinese Calendar.This year, being the Year of the Rat. we were visited in the Art Room by a pet rat, Munchkin, so we could draw her in preparation for our mosaic.